When Kathy Luders was a little girl—about the age that the main character, Ruth Ann, is in the book—she came across a stack of loose, yellowing pages, all rather tattered, in the bottom drawer of a cupboard in her home. Her mother, the “real” Ruth Ann, told Luders that they were pages of a story that Frances Willey Beebe had written for her daughter as a young girl. Despite her curiosity, Luders never asked her mother to read her the manuscript—and her mother didn’t offer.

“I will never know for sure why we were unable to discuss the story of Ruth Ann back then or why my mother never spoke of her mother. I suspect that it was just too painful for her since her mother passed away at thirty-nine when my mother was just a child,” says Luders.

Nearly ﬁfty years later, when her mother passed away, Luders went through her belongings and stumbled upon the manuscript again—even more tattered with time. Then Luders was ﬁnally able to read the story, and she felt an immediate connection to Frances Willey Beebe—the grandmother she had never met.

“At ﬁrst I thought I would spiral bind the pages and give them to various kids and members of the family; how- ever, as I began reading what had been typed so many years ago, I found much to be either missing or incomplete,” Luders says. “I also found that the more I read, the more involved I became. I connected with the material in a way that is difﬁcult to explain.”

Ruth Ann and the Green Blowster became a two-year writing adventure, and Luders found herself becoming the story’s coauthor as she worked with the original manuscript to maintain the integrity of Beebe’s story. “I would love to see Ruth Ann and the Green Blowster made into an animated ﬁlm for children,” Luders says. “It would be great in the style of the old Disney ﬁlms.”

As a child, Luders loved the Winnie the Pooh series, Raggedy Ann, and all Disney stories and is glad she could never seem to part with these old books because she now looks forward to sharing them with her grandchildren. Early in life, Luders’ mother helped her realize that books open the world: they teach, inspire, and entertain. The stuffed bookcases in her present-day family room are proof she hasn’t forgotten that!

A resident of San Antonio, Texas, Luders and her husband, Rich, have two grown sons, Ryan and Wade, a daughter-in-law, Ann, and two grandchildren, Will and Emily. Currently, Luders is focused on the present and is enjoying every minute of the adventure that Ruth Ann’s tale has taken her on. She does not know if she will write another book because currently she is having a wonderful—and busy—time being the best wife, mother, grandmother, and friend that she can be. 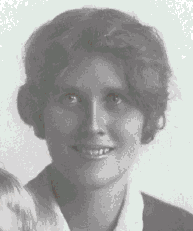 Frances Willey Beebe was born in Fort Wayne, Indiana, in 1891. She was educated at Stanford University and became the society editor for the San Diego Sun in 1912. In 1914, she became a screenplay writer at Universal Studies and helped her husband, Ford I. Beebe Sr., to get into the ﬁlm industry. He became a well-regarded movie director, producer, and writer.

Not only was Beebe a proliﬁc writer, but she was also an actress and a poet. She won the Martin poetry award in the 1920’s and received $1,000—quite a large sum of money at the time.

She began writing a story for her daughter, Ruth Ann, but sadly Beebe died before completing it. Her manuscript was tucked away and seemingly forgotten for over 70 years, until it was rediscovered by her granddaughter, Kathy.

Beebe was starting a publishing company when she became fatally ill and not long after died at age thirty- nine. She left behind her husband and six children, including Kathy Luders’ mother, Ruth Ann, who was still young at the time.

Beebe’s granddaughter, Kathy, says her grandmother had a “wonderful imagination and sense of whimsy.”